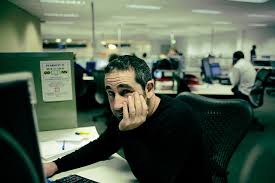 Fred sat mutely in the plush chair of his boss’s office, distracted by the overabundance of nick-nacks, family photos, day calendars, motivational posters, most of all by the strange smell hanging over the room, a mixture of lacquer and bug deterrent.

Bossman was staring daggers at him, his wrinkly forehead tensing and contracting as though it had a pulse, his cologne mixing with the room’s more prominent odors. His face was taut, crumpled into a quivering and angry mishmash of upper and lower lip. A tiny node of sweat was forming near the ever-receding boundary of his chemically altered hair.

“Either you’ve got the biggest balls on Earth or you’re smoking something bad, Wilson.” He growled, hands clasped together, almost as in communion; the angriest monk Fred had ever seen.

“I’m sorry, sir?” whisped Fred, lightly intrigued by a hitherto unnoticed scab on his left hand. A fly hovered near the windowsill.

“You seriously gonna give me that bullshit right now?”

“I guess I’m not sure what’s wrong”

“The demo for the ad, Fred! You think this is a game! This is how we make our money, Fred!” Bossman pointed to the ground with each word, providing a rickety and disheveled emphasis.

Howard couldn’t help but think: The floor? We make our money with the floor? But that was unproductive. Though to be fair, he wasn’t entirely sure why he’d been called up to the office in the first place. By all accounts the demo for “CreditReview.com” was a resounding success: finished on time, under budget, perhaps the ad itself ran a little long, but it was redeemed, in Fred’s opinion, by being quite innovative; a meta-textual piece that not only conveyed the dangers of the profligate and reckless use of credit but also subtly satirized the ad agency itself, its overbearing aesthetics, its use of jumbled and random clichés and spurious cultural references; Fred hoped this could lead to a new style in television advertisements.

They would be honest advertisements, or better put, advertisements that weren’t dishonest. Because why bother with all the silly sleight of hands, the disorientating slurry of disjunctive images, anthropomorphic yuck yuck animal gags, the ‘quirky’ bon mots, when at the end of the day its always a hard sell? Better to be upfront, he thought, and tell those dumb motherfuckers that you think they’re dumb motherfuckers to their faces (metaphorically speaking).

“I’m confused as to what’s wrong with it?”

Bossman leapt from his chair with a growl, pulling down hard on his tie. He grabbed an unmarked DVD and rammed it into the player; the screen behind his desk flickered to life:

[Open to couple sitting on sofa, looking at a laptop. Cut to laptop set to CreditReview.com with credit slider and guacamole slider displayed. Wife: “With CreditReviewer’s patented crdedit slider, we can see exactly what effect our credit score has on our purchasing abilities!” Husband: “Cool! But what’s the ‘guacamole slider’ do?”. Slider is moved all the way to the right, heading reading ‘full guac’.

Cut to the couple, startled but somehow amused at the motley gang of ‘roiding freaks. The man begins to ask, “what are doing here?” but is interrupted by the largest of the bloated muscle blimps who says in a commanding voice:

“You’re going to eat some guac”.

The other three nod in an intimidating and threating fashion behind him, rapping their spatulas against the tubs of guac.

Woman on couch: “Oh, well, but, we’re not really hungry and-“

Man on couch, standing up: “Hey, buddy. You can’t just barge in here and talk to my wife like that-“

Suddenly, with a sickly ‘thwack’, the wrestler in sky blue strikes him across the head with the spatula. He falls to the ground, clutching his head, writhing, calling out in pain. His wife screams: ‘thwack’. She falls to the couch, dazed then in shock as the four wrestlers rush to her husband, their latex costumes squeaking with a plastic rubbing noise vaguely akin to basketball shoes on hardwood. The wrestlers proceed to attempt comically over-the-top wrestling moves: back handed slaps; arm bars; suplexes; DDTs; a Piledriver; The People’s Elbow. After pinning the man for a three-count, the orange and green bedecked wrestlers grapple him, holding him firmly and roughly; the neon yellow clad lump of meat forces the man’s mouth open as the enormous and irregularly proportioned sky blue wrestler begins force-feeding him guacamole.

Several seconds of the man writhing against his captors, each thrash of his arms eliciting an elbow to the stomach; the man attempting to spit out the guacamole, the force and frequency of its entering his throat causing him to gag, each bit of spittle scooped up by the spatula and thrust harder and farther in; his wife screaming to the side, her left hand covering her mouth, her right nervously fidgeting and rubbing against the gash across her forehead; the wrestlers laughing all the while with deep, hearty laughter.

“What are you doing to him!”

“He needs to eat some guac, damnit!”

Cut to a similar scene: the man held against his will and being force-fed guacamole- three empty tubs and fourth half consumed. Exhausted, drenched in sweat, he can barely move, now completely supported by the two meat-heads who flank him; the wrestlers look tired as well, the vigor and zest with which they’ve been ramming handfuls of guac down this man’s throat now replaced by a fatigued and workmanlike pace, bored even. A clock in the background indicates that it is ten pm; it is dark outside, an eerie high-pitched noise emanating from the night, some grotesque hybrid of an owl and a rabid possum. The woman rests crumpled on the hardwood floor, three slight streaks of red listing down the side of her right cheek, eyes bleary and raw and tear-drenched, breathless heaving sobs jittering from her, making her quiver like a small puppy.

The man begins to projectile vomit. The first bit of vomitus erupts and splatters like a rushing water breaking against rocks, dousing the sky blue wrestler in the face, forming little pale green droplets in his mustache; he is unperturbed. The man now cannot physically stop vomiting, a steady stream of avocado and tomato chunks dribbling and popping out of his mouth. The wrestlers drop him to the floor as howls and moans, the exodus of guacamole slowed but much more sputtered.

Cut to the man lying on his side, clutching his stomach, his shirt stained all down the front, a splotchy puddle of puke around him, tendrils creeping out in all directions, his wife huddling over him as a low and pitiful whimper barely makes it past the man’s pursed, buzzing lips, she quietly sobbing and patting his head and gently squeezing his shoulders. Another loud ‘ahem!’ grunt: the couple looks up.

Cut to the wrestlers, each with significant amounts of vomit on their costumes, looking down at the camera, arms folded triumphantly, their lips tight in a job-well-done pucker:

The screen turned blue. Bossman stood behind his desk, tapping his foot in a rapid and un-rhythmic cadence, a glare of utter malice contorting his face. Fred noticed considerable patches of sweat on Bossman’s egg-white shirt. The fly was now buzzing with much more esprit, banging against the windowpane in disjointed syncopation with Bossman’s right foot.

Fred really had no idea how he’d gotten the scab, no recollection of accidental collisions with anything recently that would cause a break in his skin. It was a somewhat unnerving feeling, eliciting a string of wild theories involving sleepwalking and/or narcolepsy. He became aware that his left shoelace was untied; Good God, he chuckled inwardly, the verge of catastrophe. I knew something was amiss.

Hearing heavy and damp gulps of breath near his face, he looked up to see Bossman leaning over his desk, eyes wild and pulsing with the same weird surging throb as his glazed forehead; a minute puddle of sweat was forming on the slick, lacquered mahogany.

“Listen to me, you smart ass little shit,” hissed Bossman, his teeth grinding together, gums raw and flaky, “Rewrite and re-shoot it by the end of the week or youre fired, Wilson!” He was almost bobbing with anger, his belly curtly swaying side to side in his shirt.

Fred blinked, looked to his scab, pondered, and replied:

“In that case, I must immediately tender my resignation, sir.”

“This is the greatest thing I’ve ever produced, I do not feel that I can ever surpass it, and for you to denigrate it makes me loose my vigor for the business”.

Fred stood up, and striding briskly to the window, caught the fly, ate it, thrust open the window, and leapt to his death.